Enjoying a sunny Tacoma afternoon aboard the Commencement, the lawyers and staff of
Ledger Square Law toasted the success of Mike Vlahovich, a 2016 NEA National Heritage Fellow.  Born in Tacoma to Croatian immigrants, Mike is a master shipwright and third- 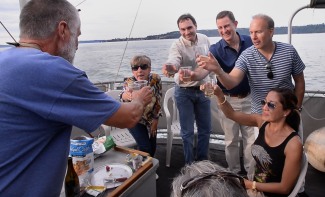 generation fisherman who has dedicated his life’s work to the preservation of the heritage of fisheries of the Northwest and the Chesapeake Bay.   During an afternoon outing, Mike provided Ledger Square lawyers and staff a wonderful opportunity to learn more about the Coastal Heritage Alliance, www.coastalheritage.org.  Ledger Square Law salutes Mike and his tremendous accomplishment!

Seeking to influence the administration of water rights for future development,  a group of concerned Tacoma citizens (organized as “Save Tacoma Water” or STW) sought to place local initiatives on the ballot to amend Tacoma City Code and the Tacoma City Charter to require a public vote for any future water use application exceeding one million gallons per day (“STW Initiatives”).  Because the proposed STW Initiatives were facially invalid under established state law, Ledger Square Law attorney Jason Whalen, representing member investors of the Economic Development Board of Tacoma-Pierce County, teamed with attorneys representing the City of Tacoma, the Port of Tacoma, and the Tacoma-Pierce County Chamber of Commerce (collectively, as Plaintiffs), to score a significant legal victory which sustains the rule of law regarding appropriate, pre-ballot court review of local citizen initiatives.  Today’s ruling provides certainty for the Port of Tacoma, the EDB, and the Chamber over the City’s administration of water and water rights for prudent economic development in our community.   The ruling also saves the citizens of Tacoma thousands of dollars in unnecessary expense in placing unlawful measures on the ballot.

After significant briefing and lengthy oral argument, the Pierce County Superior Court Judge Jack Nevin granted Plaintiffs declaratory and permanent injunctive relief, finding that the STW Initiatives, as written, exceeded the permissible scope of local initiative power and were therefore invalid, as a matter of law.  By court order, the STW Initiatives are now precluded from placement on the November 2016 ballot—or any other ballot in the future, regardless of the signature validation by the County Auditor.